PLX has been producing space-qualified instruments and components for over 40 years and cover a wide range of applications.

The latest example is our Retroreflectors operating in the TIRVIM (Thermal Infra-Red V-Shape Interferometer Mounting) Spectrometer, which is part of the Atmospheric Chemistry Suite (ACS), launched in March, 2016 and is now successfully operating in orbit around Mars.

Some examples include RIS which is the largest Retroreflector ever sent into space as well as Beryllium assemblies for the Thermal Emission Spectrometer (TES) built by JPL for NASA. 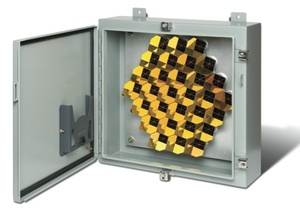 Retroreflector Array  helped create a high-resolution database of the earth. PLX’s space qualified retroreflectors are part of the most recent experiments to measure the atmospheric conditions on Earth, Mars and Venus.

PLX’s space heritage dates back to July 1975 when the company provided hollow retroreflectors to the Apollo-Soyuz Russian-American space hookup program. The units were used in the docking procedure to align the two vehicles. The program included both joint and separate scientific experiments and provided useful engineering experience for future joint US–Russian space flights, such as the Shuttle–Mir Program and the International Space Station.