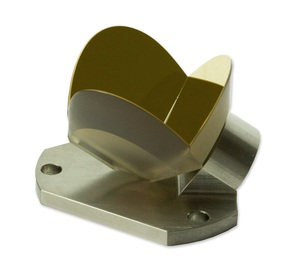 PLX Invar-mounted hard mount retroreflectors with 1.94” clear aperture and 0.5-arc second accuracy were provided for use on the Astro-H space-based X-ray observatory. These retroreflectors will be used to monitor the alignment of a 12-meter focal length x-ray telescope. CAMS is the metrology system designed to measure the lateral (X/Y) and rotational (roll) displacement in the spacecraft’s optical bench relative to the instruments.

ASTRO-H is expected to provide breakthrough results in scientific areas as diverse as the large-scale structure of the Universe and its evolution, the behavior of matter in the gravitational strong field regime, the physical conditions in sites of cosmic-ray acceleration, and the distribution of dark matter in galaxy clusters. Expected launch is 2016.

The Relay Mirror Experiment (RME) in 1990 successfully demonstrated long-range, low-jitter tracking and pointing capabilities appropriate for ground-based laser (GBL) propagation. Relay mirrors have been proposed as a method of increasing the range of laser weapons that is less costly than deploying a larger number of laser weapons. 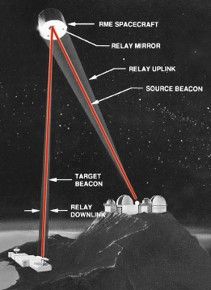 Low-power Atmospheric Compensation (LACE) was an experiment paired with RME.

PLX also built Retroreflector components for NASA’s Discovery Shuttle Long-Distance Laser Test performed in 1985. This used an 8-inch Retroreflector mounted to one of Discovery’s windows. A low power laser was launched from Maui. The test was a part of the SDIO “Star Wars” program and was intended to see if it was possible to target and track a high-flying fast moving object. It also was to determine the effects of atmospheric aberrations on the laser beam.